About the Church Organ

An illustrated 44 page booklet The Organs and Music of Wroughton Parish Church by John Henderson ISBN 9780952805038 can be downloaded free of charge by clicking on the link. Printed copies may be purchased from the church office at £6.50 + p&p. A brief summary of the organ’s history follows:

The present organ was built in 1927 at a cost of £1100 (equivalent to around £60,000 in 2015) by the firm of J.G.Haskins & Co of Brigstocke Road, St. Paul’s, in Bristol. There was actually no such person as J.G.Haskins for this was a pseudonym. Two brothers ran the firm – Arthur Edwin Keyes and William Anthony Keyes, sons of Anthony Wyatt Keyes, also an organ builder in Bristol. The Keyes brothers both worked for W.G.Vowles of Bristol (the builder of an organ for Bristol Cathedral in 1861) and Arthur Edwin Keyes was their senior designer. In 1905 the firm of Vowles went into decline and needed to lay off men including William Anthony Keyes. Arthur Edwin decided to resign and the Keyes brothers set up independently taking on some of the other men laid off. They built about one organ a year, many in private houses as well as in chapels and churches. For reasons of business ethics they decided to use the pseudonym “Haskins”. The firm continued until 1940 when their Bristol factory burnt down in a bombing raid. The Haskins company built around 20 new instruments between 1910 and 1930, mostly in Bristol, Somerset, Gloucestershire and Wiltshire. Another instrument very similar in specification to the Wroughton was also built for St. Paul’s Anglican Church in Swindon, demolished in the 1960s. The quality and voicing of the strings and flutes in Wroughton are exceptional, far superior to Haskins’ other work suggesting that the present instrument probably contains pipe work from elsewhere. The organ was dedicated on Thursday May 12th 1927 by Dr.R.T.Talbot (Archdeacon of Swindon) with Mr. John J.Gale (organist at St. Mark’s Swindon and formerly at Wroughton) as organist. The pieces performed by Mr. Gale during the service, which was both a service of blessing and thanksgiving and also an organ recital, included Fugue in D by J. S. Bach, Marche funèbre et chant séraphique by Alexandre Guilmant, Songs in the Night by Walter Spinney, April Showers by Eugène Favet and Grand Offertoire in D by Edouard Batiste.

The North Wilts Herald announced the following week that “the organ is claimed to be the finest in the neighbourhood of Swindon”. Some of us still think this is the case!

Prior to the major rebuilding of the church in Victorian times there had been a West Gallery in the church and music was provided by “West Gallery Musicians”. In 1847 the (first known) organ in the church was vandalised and destroyed and rumours were rife that the displaced West Gallery musicians were responsible for this. Around 1850 a small instrument (one manual, without pedals) by J.Smith of Bristol was situated on the north wall in the niche were a former external door was blocked up and this was probably a replacement for the vandalised instrument. There is a newspaper article dated 1927 implying that this instrument, replaced in 1875, was later used in Winterbourne Bassett church.

The replacement organ installed in September 1875 was a second-hand instrument of two manuals and pedals newly sited in the Chancel. The builder of this instrument is unknown, but around the time of World War I it was under the care of Gray & Davison, the large London firm who had a branch in Oxford. For the sum of 35 Pounds and 2 Shillings, G&D renewed part of the pedal mechanism and changed a Cornopean stop for a Gamba in 1914. It is not known what became of this organ, but pipes from it are unlikely to have been re-used in the present organ for the one organ was replaced by the other in the amazingly short time of two weeks.

We are grateful to Major Anthony Horne, grandson of Arthur Edwin Keyes, the builder of our organ, for information about the firm of Haskins.

Rebuilding and renovation of the organ took place in 2005/2006 by the firm of Foster-Waite of Newbury.

Front display pipes speak, the side pipes are dummies

Tubular pneumatic action except for 17 & 19 which are electric action.

There are 1408 speaking pipes.

The case, in Austrian oak, was designed by W. A. H. Masters, LICRBA, who probably lived in Wroughton as he was appointed as a Churchwarden in 1927.

3 composition pedals each to Swell and Great, the latter also controlling the pedal stops.
Blowing

In 2006 the 1949 Discus blower was moved from the back of the organ and placed inside the pedal organ. Asbestos sound-proofing was removed and replaced. The motor was rewired and reconnected correctly for at some time it was wired to run the wrong way !

The original rotary handle for manual blowing is still functional. 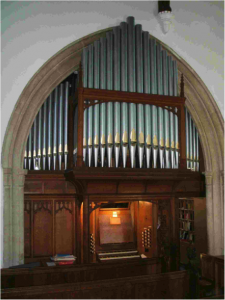 The organ in 2006 following renovation.